Skills are amazing and unique abilities that players can use to defeat their enemies or buff their party mates fighting and surviving. Skills are either passive i.e always active, in which case they don't need to be bound to take effect, or active. Active skills must be bound and cast in order to be used.

Upgrading a skill increases its power. Players can choose the skill they would like to upgrade based on their play style and skill path they decided to follow. Upgrading a skill takes one skill point which are earned when leveling up. You can upgrade your skills in the skill GUI (/skills).

Select the skill you'd like to upgrade by scrolling through your class' skills at the top of the GUI, and click on the upgrade item. On the bottom of the GUI, you can see how powerful the spell would be with a higher level.

You have 6 skill slots which you can use to bind active skills to certain keybinds, therefore you can't have more than 6 active skills bound at a time. You may bind skills using the skill GUI, available using /skills. Once your skills are upgraded (see above), you can click the Switch to Binding item, in order to display your current available skill slots. You may also see your current bound active skills. You can bind the selected skill to a specific slot by clicking the corresponding item. As soon as you click it, it will update and display the newest skill. If slot X is unused, skills bound onto other skill slots will automatically refill empty slots so lower keybinds are always used.

Once your skills are upgraded and bound, you may cast them.

Keep in mind most skills do also have a cooldown, mana and stamina modifiers although they are not represented in the array.

Each skill has its own YML file where you can edit the lore and how it looks in the /skills menu. It is best to only edit the plain words, and not try and mess with the value placeholders.

At this current time, there is no "create your own skill" system, but we have decided the coolest thing to do is to allow MythicMobs skills to become MMOCore skills. This will effectively replace the need for SkillAPI, or any other skill creation plugins. You will be able to utilize the default skills that we have and continue to add, while creating hundreds of your own skills through MythicMobs syntax.

This is an example skill showing the name option, lore, and several attribute modifiers.

For each skill you can edit the display name, how it looks in the /skills, and then all of its modifiers. The base option is how much damage/value it will have by default, and then per-level is what it will change by each time you level up the skill using skill points. There is a max and minimum for these values as well, that way you can't have a -2sec cooldown.

The material option determines what icon will display in the player's skill list. Using <MATERIAL_NAME>:<integer> will apply a custom model data to your skill icon, where the integer input is the custom model data being used. 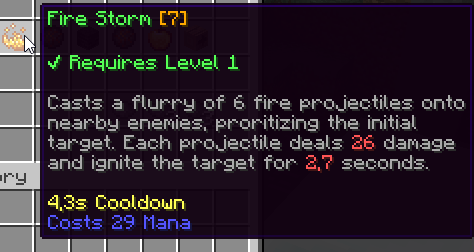 MMOCore currently does not have that many default player skills. However there is an option to create active MMOCore skills using the MythicMobs skill creation system. This gives you endless possibilities for MMOCore player skills. This requires MythicMobs 4.7.0 or newer.

In order to create a MMOCore skill using a MM skill, you need to setup one YAML configuration file (the file name will correspond to the MMOCore skill ID) in the /skills/mythic-mobs folder. Here is the config template:

As you can see, the skill display options and modifiers have the same format as with default MMOCore abilities. However, since you are registering a new skill which has no effect when cast, you need to link it to a MythicMobs skill, using the mythicmobs-skill-id config option. Make sure you enter the exact MM skill internal name. At this point, MMOCore should start detecting your skill (if you give it to any class). 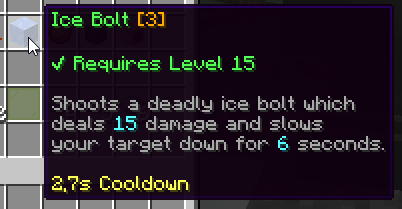 Once you have the MMOCore skill setup, head to your MythicMobs config and create your MM skill. We'll be using a wiki skill example called Ice Bolt which fires a damaging and slowing ice projectile.

Right now, the skill always deal the same amount of damage since there are the following lines: damage{a=10} and potion{type=SLOW;duration=100;lvl=2}. With MythicMobs, you can enter math formulas for the damage and effect duration/amplifier. These formulas can retrieve MythicMobs placeholders which allow skill mechanics to deal a different amount of damage, based on the placeholder output!

MMOCore adds a new MythicMobs placeholder called <modifier.(modifier)> which basically returns the value of the skill modifier. This placeholder is registered by MMOCore and is saved in a MM skill variable, which scope is set to SKILL; that means you can use this variable anywhere in your skill! Here is a use example:

Do not forget to multiply the duration by 20 since the MM input must be in ticks. The placeholder is pretty case sensitive so make just you specify the exact same modifier name as the one you setup earlier in your MMOCore skill config.

MMOCore adds a second very useful placeholder to MM skills that lets you retrieve a specific player statistic: <stat.(stat_name)>. This placeholder was implemented because the PAPI placeholder %mmocore_stat_(stat_name)% does not always work in MM skill mechanics. Here is an use example:

Since 1.8, custom MMOCore skills using the MM skill creation system supports skill conditions: if any condition is not met, the skill will not cast and MMOCore won't apply cooldown, mana costs...

Here is the full list of placeholders implemented by MMOCore. Some of them are actually implemented by MythicLib which means you can also use them in MMOItems custom skills.

The only skill mechanic MMOCore implements is a damaging mechanic:

You can specify the ability damage using "amount" or "a" as well as the damage types using "types" or "t". The list of available damage types can be found here.

It works just like the default damage mechanic, except that it completely supports the MythicLib damage system, which means that it will apply damage buff stats (additional skill damage, etc), damage reduction stats, on-hit effects (on-hit abilities from MMOItems when using the WEAPON damage type), skills from MMOCore that trigger when dealing damage to entities....

If you want to make a passive skill (using MythicMobs) all you have to do is add passive-type: TYPE to your skill YML file in the '/skills/mythic-mobs' folder. Adding a passive type to your skill will prevent it from being bound and will automatically cast during specific events, depending on the passive type specified.

The caster of the skill will ALWAYS be the player, but the @Trigger targeter in the skill can change depending on which passive type you use.